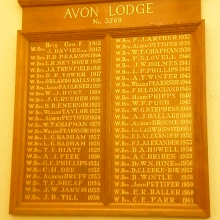 In November 1999 a joint paper was presented to the Lodge, By W/Bros. Ernie Moss, Tom Emmerson and Alan Smith, entitled “My recollections of Freemasonry.”  The first part of the paper was a re-run of W/Bro Henry King’s “1912- 1987. 75 years – A Brief History of Avon Lodge”. This was followed by some personal observations (we think from Ernie Moss).

“Since the lodge was consecrated there have been 335 entries (at 1999) in the Register of Members, although about 5 of those entries relate to members who have re-joined.  The Membership consisted of a real cross section of the community, including schoolmasters, surveyors, civil engineers, police officers, jewellers, fruit growers, farmers, grocers, chemists. wine merchants, gentlemen and others.

There were no fewer than 17 clerks in holy orders, 16 bankers, 6 solicitors, 5 doctors or surgeons, 3 accountants and 1 professional cricketer, namely Sid Buller, the well known Worcestershire Wicket Keeper. Tom Bateman, the well known Evesham Architect was once a member.”

Ernie goes on to say …” To those of you who are not Pershore residents, The Music Hall in Pershore where the Consecration of the Lodge took place, is the large building at the rear of Manor Farms Shops in the High Street, or you may more easily recognise it as the large building in what was formerly the Manor Farms car park approached from the access road to the health Centre, in Priest Lane Pershore.  One of the Founder Members mentioned in the paper, Owen Lowry Wynne Marriot, lived in the Mansion House, which is now The Pershore College of Horticulture, at the top of Wick Hill, leading out of Pershore on the Evesham Road.

Other Founder Members, Richard Biddulph Martin, and Robert Martin Holland, are described as Bankers and were almost certainly connected with the Holland Martins of Overbury Court, near Tewkesbury, and possibly the Bank formerly known as Martins Bank.

W/Bro. William Thomas Smith Chapman (Pop Chapman as he was known) referred to in the paper was a headmaster, and a very well known and loved Pershore figure.

Dr.H.G.Browning, another member, lived at Perrott House, Bridge Street Pershore, which has so recently been gutted by fire.

The paper also paid tribute to W/Bro George Farr, he was a fine ritualist and I well remember that on a certain Past Master’s Night, he had agreed to perform the second half the 3rd degree ceremony, and W/Bro. Carrington was to perform the first half. Unfortunately W/Bro. Carrington went down with the flu on the morning of the Lodge day and telephoned to say he could not attend. W/Bro. Farr immediately undertook to perform the whole ceremony which he did without one prompt.

It was a lesson and an example to us all.”

Thanks are given to W/Bro. John Pritchard who supplied the following information following his research into the Founder Members, including his Great Grandfather… James William Smith.

Sir Richard Biddulph Martin, 1st Baronet (12th May1838 – 23rd August 1916) was an English banker and Liberal Party (and later Liberal Unionist) politician. Martin was the older of two sons of Robert Martin (1808-1897) of Overbury Court near Tewkesbury in Gloucestershire, and his wife, Mary Ann (d.1892), who was the daughter of John Biddulph of the banking firm of Cocks, Biddulph &Co.. Robert Martin was a partner of the Grasshopper Bank, which later became Martins Bank.

He was educated at Harrow School, and at Exeter College, Oxford, before joining his maternal grandfather’s bank. He later became one of the founders of the British North Borneo Company, and of the Institute of Bankers.
Martin first stood for election to the House of Commons at the 1868 general election, when he was an unsuccessful candidate in the Eastern division of Worcestershire. He was unsuccessful again in the next candidacy, at the 1880 general election in the City of London. However, 3 months later he was elected as Member of Parliament(MP) for Tewkesbury at a by-election held in July1880 after the result of the general election in April was overturned on petition. Several of his ancestors had held the seat in the past, but Richard was the last Martin to represent Tewkesbury. The Parliamentary Borough of Tewkesbury was abolished under the reform act 1885 and replaced with a wider county division of Gloucestershire.

At the 1885 general election he did not stand for re-election in the new Tewkesbury division of Gloucestershire, contesting instead the Chelmsford division of Essex, but without success.
When the Liberal Party split over Irish Home Rule, he joined the breakaway Liberal Unionist Party, and stood as a Liberal Unionist in the Ashburton division of Devon, again without success. He finally returned to Parliament at the 1892 general election as MP for the Droitwich division of Worcestershire, replacing the Liberal Unionist John Corbett, who had retired. Martin remained Droitwich’s MP until he stood down at the 1906 general election. He was made a Baronet on 12th December 1905, of Overbury Court, in Gloucestershire. He died childless, and the title became extinct on his death. He was President of the Royal Statistical Society from 1906 to 1907.

George William Coventry, Viscount Deerhurst (1865-1927), eldest son of the Earl of Coventry, who would have become Earl on his father’s death.

Orlando Ralls, born in Bridgwater in 1849, and his death is registered in Cheltenham in 1932. He lived in Worcester Street, Pershore according to the 1911 census, and is believed to be buried in Pershore.

Henry St John Wilding (1850-1914) . Born in Worcester, a former Headmaster of Evesham Grammar School, and a Priest living in Birlingham, near Pershore.

James William Smith (1852-1918),(Great Grandfather of John Pritchard), was a builder and undertaker of Priests Lane Pershore. He married Elizabeth Brewer Curtis, the daughter of a Cornish Sea Captain in December 1877. They had 8 children, eldest of which was John Pritchard’s Paternal Grandmother.

General Sir Francis Davies KCB,KCMG,KCVO (1864 – 1948). Was the first Worshipful Master of Avon Lodge, an office he held for two years after consecration ie. 1912 and 1913.  He had a distinguished military career, serving in the Second Boer War as Deputy Assistant General responsible for Intelligence at Army Headquarters South Africa. He was appointed acting Commissioner of Police for Johannesburg in 1900.

He was made General Officer Commanding 1 (Guards) Brigade in 1909 and then Director of Staff Duties at the War Office in 1913.  He served in World War 1, becoming General Officer Commanding 8th Division on the Western Front in 1914 (in which capacity he led the Division at the Battle of Neuve Chapelle and the Battle of Aubers Ridge).  He lived in Elmley Castle Worcestershire.

We use cookies on our website to give you the most relevant experience by remembering your preferences and repeat visits. By clicking “Accept All”, you consent to the use of ALL the cookies. However, you may visit "Cookie Settings" to provide a controlled consent.
Cookie SettingsAccept All
Manage consent

This website uses cookies to improve your experience while you navigate through the website. Out of these, the cookies that are categorized as necessary are stored on your browser as they are essential for the working of basic functionalities of the website. We also use third-party cookies that help us analyze and understand how you use this website. These cookies will be stored in your browser only with your consent. You also have the option to opt-out of these cookies. But opting out of some of these cookies may affect your browsing experience.
Necessary Always Enabled
Necessary cookies are absolutely essential for the website to function properly. These cookies ensure basic functionalities and security features of the website, anonymously.
Functional
Functional cookies help to perform certain functionalities like sharing the content of the website on social media platforms, collect feedbacks, and other third-party features.
Performance
Performance cookies are used to understand and analyze the key performance indexes of the website which helps in delivering a better user experience for the visitors.
Analytics
Analytical cookies are used to understand how visitors interact with the website. These cookies help provide information on metrics the number of visitors, bounce rate, traffic source, etc.
Advertisement
Advertisement cookies are used to provide visitors with relevant ads and marketing campaigns. These cookies track visitors across websites and collect information to provide customized ads.
Others
Other uncategorized cookies are those that are being analyzed and have not been classified into a category as yet.
SAVE & ACCEPT